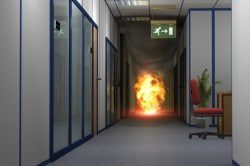 One of our oldest clients had a massive office fire, and because of the technologies Rekall put into place, they are still in business and have all of their data fully intact. Managing partners and firm owners alike can learn a lot from our client’s misfortune, this is their story.

The fire occurred around 10:00pm, taking out three floors of a 12 story office building in central New Jersey. Due to the network notifications that we had in place for all workstations and servers, it initially looked like the firm’s internet was down. Their network temperature sensor in the server room was not reporting anything out of the ordinary.

Later, we realized it was because the fire started down the hall from the server room, killing the power to the entire office suite, and traveled through the telecommunications room feeding internet to the entire floor. Firefighters got there within one hour of the blaze and started pumping water into the second story windows. By the time Rekall techs were allowed into the building in the morning, everything had either burned, or was waterlogged from fire suppression. Servers, desktops, printers, everything was ready for the garbage. People often forget about the water damage factor in a fire.

Rekall was tasked with getting the 25 attorneys up and running ASAP. Luckily, this particular law firm subscribed to Rekall’s Data Backup/Disaster Recovery Solution. All firm data was backed up on Rekall’s Private Cloud, ready to restore at a moment’s notice. Within only two hours the firm was able to work via a temporary cloud solution that was quickly built and deployed by Rekall technicians. With the imminent threat of lost billable time avoided, Rekall then focused on purchasing new servers and workstations, dispatching wiring techs to wire up a new temporary office space, ordered internet, coordinated with copier and server hardware vendors, and recovered every bit of data that was lost in the fire.

This is a testament to Rekall’s proactive approach to law firm security and disaster recovery, not to mention the reliability of Rekall’s Private Cloud & Disaster Recovery services. If you’re interested in working with an IT company 100% focused on the needs of law firms with real-world experience with disaster recovery planning and execution, give Rekall Technologies a call.