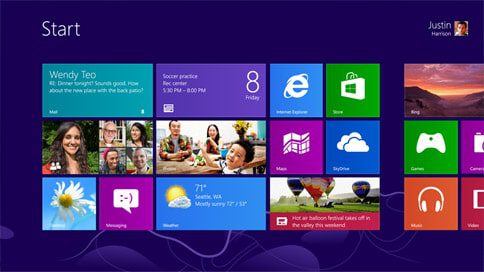 Every few years Microsoft remembers that they make money on operating systems so they release a new one which usually sucks in the beginning and gets better as the service packs start rolling out. I implore you, don’t be a Microsoft guinea pig. The early adopters always get screwed may it be software compatibility,  general OS navigation issues, or programming issues with the operating system. If we were to follow the trend of M$ operating systems, this OS should be crappy. Windows 2000 was great followed by Windows ME which was terrible, but then Windows XP was great, then followed by Windows Vista which was terrible again. Windows 7 is excellent, will Windows 8 break the streak of good then bad, I’m going to say no on this, the trend lives on!

Microsoft made this OS based on touch and touch screens. There is a touch screen view as well as a Windows 7 type view that works with a standard keyboard and mouse. For those of you who use multiple monitors, Windows 8 supports a broader arrangement of monitors and it actually starts up quicker than Windows 7. The problem is that the Metro interface (touch) works with a mouse fine, it’s just not intuitive for application navigation, it;s like an iPad computer. It goes against every predetermined navigation idea in the Windows library. In terms of law firms and business, this portion of the OS has no place in the business world. It’s an OS to support tablets, and it was Microsoft’s solution for new tablets and other tablet vendors in order to go up against Apples iOS and Google’s Android, in my opinion.

Take my advice, stick with Windows 7, I smell the Microsoft good, bad trend right on schedule. They will still support and sell Windows 7 for a long time, and when enough people love a Microsoft OS, they often extend support for the product. Windows XP lasted 9 years in terms of support, while Vista was a mere 5. In terms of this, Microsoft listens to their customers.